Let there be .. A Ride Report.

Let there be .. a ride report! Yes, finally and long overdue! :)
A few months ago I had predicted, if not promised that it would be 2015 before any motorcycle content may show up on this blog. At that time I was expecting that I may actually not have any time to ride till the new year rolls around. I was only partly correct, and the report which follows is of a ride in December of 2014. It's just that I have only now found the time to write about it. :)
It was not a foray into uncharted and unknown territories, I was re-discovering some familiar grounds, which I had not stomped on in quite a while, while hoping to rejuvenate some friendships along the way, which had also laid dormant for quite some time. It was to be an oft piloted route to San Diego, with some beloved stops along the way - including the Big Sur coastline. The weather gods, however, had a different plan. The California coast and the rest of the state, had just a day ago, been hit by what some were calling the "Storm of the Century", the Pacific Highway had predictably experienced landslides and was closed in several locations, it was going to be a pre-dominantly uneventful and very fast in-land route for me, until I could mosey over to the coast just past Paso Robles on Hwy 46 to meet the coastline just south of Cambria.
It had been a while, since a ride of a longer duration, and I wasn't quite in the mood to stop to take pictures along the way. In fact, I didn't take any pictures along the ride on this day, till I reached my destination. I had a feeling this first day had actually set the trend for this trip. No pictures, till I was stopped for the day, so that's what this ride report will present, for the most part.
My stop of the day was beloved Morro Bay. I was meeting my friends Tim and Mary for dinner here, before dinner, however, I was going to catch the show .. the light show. :)
Let there be .. Light!
The show was only just beginning. Here is the first view, looking at the Morro Bay Docks as the sky was just beginning to turn.

As I have pontificated many times before, I love Morro Bay. A lovely little fishing town, which in my opinion continues to walk a fine line, balancing between becoming a tourist trap and being a (not so anymore) hidden gem. This picture below, is of a monument which still anchors this town to the fishing industry. It is a monument to Fishermen who were lost at sea.

Walking further along the docks, the show had already begun. I always seem to find the "Michael Too" docked, whenever I visit. Reminds me of Michaels, who are friends, and I know a lot of Michaels.

There goes the sun, sinking beyond the horizon, driving the birds into one last flurry of activity as they seek their nests for the night.

Circling around, after the sun had set. I retrieved my bike from near the docks, and posed it for a quick photoshoot. There was still excellent light and I was happy to take advantage of it. This being a motorcycle blog, my readers have so far been kind and not complained much about a lack of motorcycle pictures, maybe I was also aiming to satisfy them. :)

The show was ending. I love purple sunsets. I have been lucky to witness them a few times now, and I know there are more to come! :)
Off to dinner I went, it was great to see my friends Tim and Mary, it had been a very long time. No pictures at dinner, I have been respecting my friends' privacy, unless explicitly permitted otherwise. This is a publicly viewed website after all.

My next stop was in San Diego, making quick work of Hwy 166 and Hwy 33 and with a quick hop-off in Orange County to see my friend Lisa. No pictures till the destination, remember? :)
I love San Diego, for much different reasons than I love Morro Bay. Mostly, I believe for the beaches. Despite being in such close vicinity to Los Armageddon-eles, thankfully San Diego has a very different feel to it, maybe slightly less crowded, but overall the effect is much more positive, appreciably so!
I was mentioning beaches, and there are a multitude of them, this one below is Pacific Beach. This time, I stayed away from the main commercial attractions of the pier and the boardwalk, remained instead on the more or less residential parts of it, on the northern reaches of it's sandy stretches.

You could still see the Pacific Beach Pier in the distance. I also discovered (for myself) a great restaurant in this area. Costa Brava - a Spanish establishment, and very popular with the locals. Fortunately, we had reservations! I met some friends there, the company was excellent and the food, the service, and the gentle strumming and serenading from the live Flamenco Guitar was exquisite!

One of the days, I did also get to enjoy the impeccable riding in the mountains to the east of San Diego, rode up to Mt. Palomar, then onward to Borrego Springs and beyond, before turning to Julian and back. I know what you are thinking, pictures or it didn't happen, but it did happen, the pictures, however, just didn't happen, it was a brisk pace and my only stops were for gasoline and food. I wanted to return in time for the sunset along the coast. I found myself at Torrey Pines state beach, just south of Del Mar. It literally is sort of a dirty beach, not exactly one of my favorites, although as a result, parking here was very easy to find. :)

Let there be .. Surf!
These shots were taken over a couple of days, at San Elijo State Beach, this one and the beach at La Jolla are my favorites.

I love foamy surf! Sometimes it draws smooth white lines in the sand.

Other times, the foam is thick, choppy and it churns!

I also enjoyed sitting by this miniature cove and watch the waves roll in, gently sometimes and crash into it at other instances. Very peaceful!

Exhausting my stay, but hopefully not my welcome in San Diego, I turned back towards home. The coast was clear, as in the coastal highway was open again, naturally I was drawn towards it, another excuse to spend another night in Morro Bay. :)
I had raced into Morro Bay, battling LA traffic and then horrendous fog on Hwy 58. Tule fog as they call it, in the initial twisty portion of Hwy 58, just west of Hwy 33, I couldn't see the turns till I was actually on them! It was a stressful traverse, until as is customary with Tule fog, it suddenly lifted and I was finally able to make some good time on this very fun highway!
Let there be .. Light! Again!
The second showing, was just something-else! I had invited my friend Don, to come have dinner with me in Morro Bay, but he had a 'date' (sure, Don, sure!) and he turned me down. Oh what a show he missed, what a show!!
What is that I hear? You want to see more bike pictures? Well, I am more than happy to oblige! :)
The first act of the show!

The last shot of the first act! I have almost always found that boat anchored there, and it circles it's anchor/dock, as the currents move in from the ocean into the bay.

The first act was transitioning into the second! This is the view looking south at the Morro Bay docks and the mountains of Montana de Oro State Park in the distance.

More bike pictures! Almost seems like I had something to make up for! :)

The 'light' just kept changing .. and changing! I was in heaven! 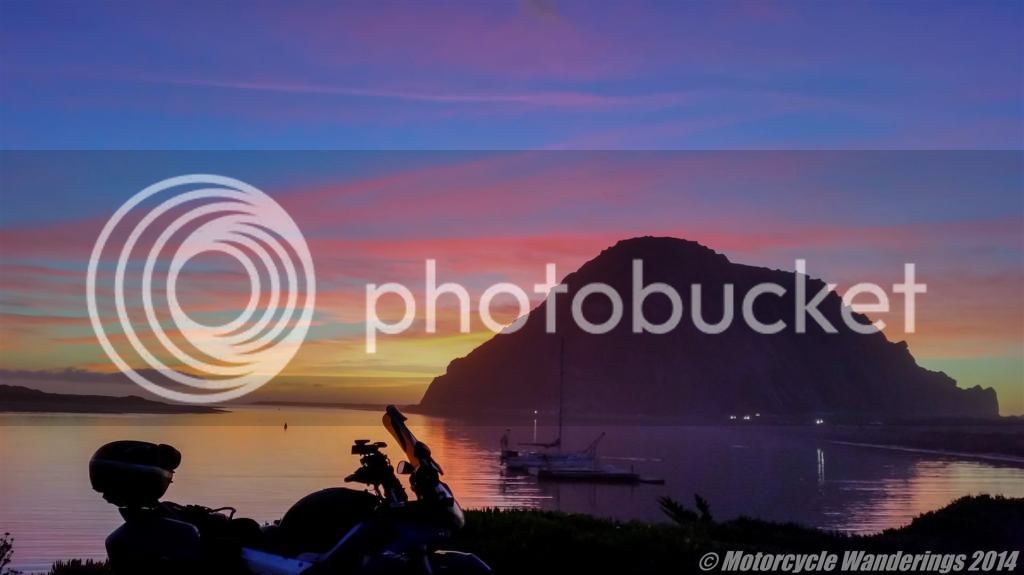 Then the final act as the colors ebbed from their crescendos, and started fading away. It was time to head to dinner, just by my lonesome this time. :)

It was a long awaited ride up the coast on the final day of the trip, I was denied the opportunity on the trip down, and I intended to make the most of it this day, as in intended to ride hard and fast! ;)
Breakfast first! This is the view from Dorn's on the Breakers in Morro Bay. It has earned it's place as my favored Breakfast place in Morro Bay.

They have outside seating as well, to be enjoyed when it is warmer.

The view of my Breakfast. Seafood Omelette with a side of fruit, and toast with home-made jelly! Yummy! 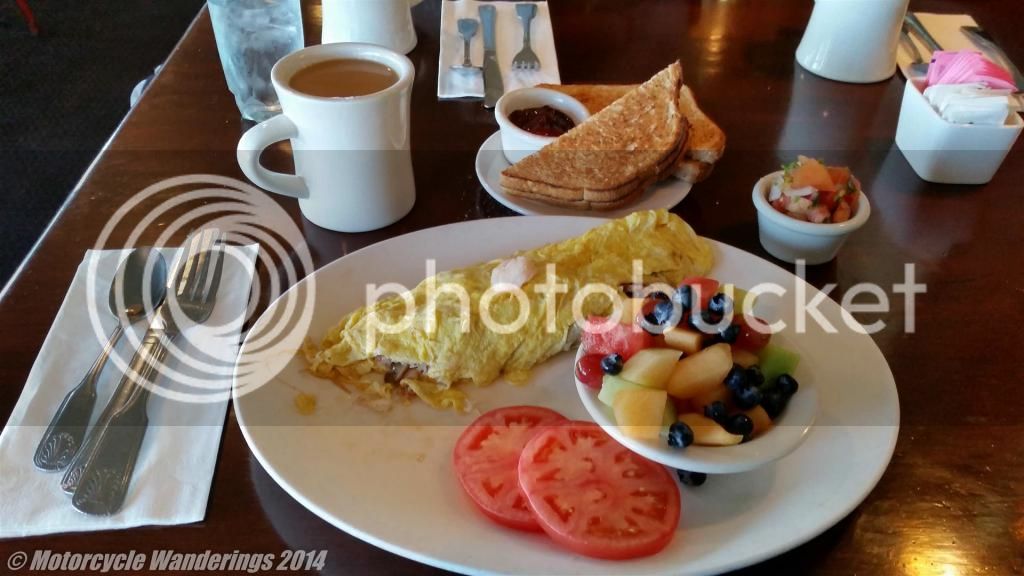 The seas were still choppy and the surf high along the coast, remnant currents from the storm, perhaps? The California coastline is eroding, and falling away into the sea, I suppose as a precursor to the rest of the coastal areas of the state following at some point. I witnessed a minuscule part of this on the ride up.
Dirty waters, washing away the shoreline.

Falling away into the sea, inch by inch, foot by foot.

The seas were invading the highway at this location. Had to watch the waves as they approached, seemingly like a biblical tide, threatening to wash you off the highway.

Then time it just right and escape getting hammered. Interesting experience! :)

The coast really was clear this day, I seemed to have timed it just right for almost non-existent traffic, and I passed whoever-else I encountered along the way, not wanting to stop to mess around with the camera, lest the slow-pokes catch up with me again.  I was making incredibly good time, and then did stop for pictures, first at McWay Falls, alas, I had made such good time, that the falls and the cove were still in shadow, not good lighting for photography, and then another stop at a scenic pull-out north of Mcway Falls, the lighting again was sub-optimal, but since I had stopped, I wanted to try nevertheless. The sub-optimal result is below. 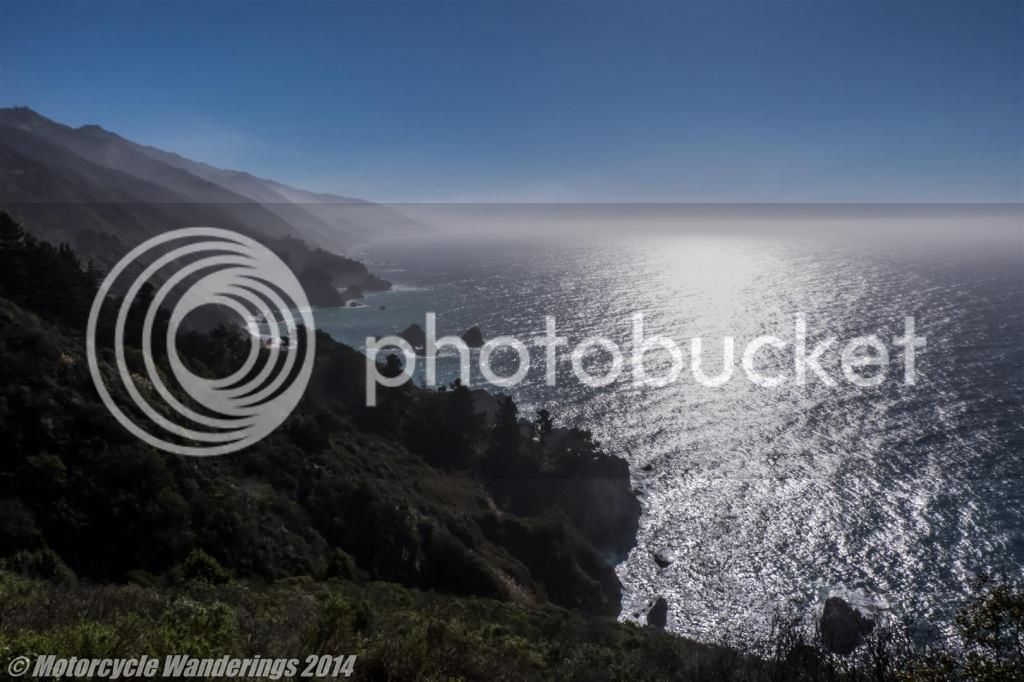 Skipped Nepenthe and stopped at Big Sur River Inn for an early lunch. This place, sadly has always been hit and miss for me, and this occasion might be the last time I stop at this restaurant. The service was decent, however the Tacos I ordered were the most tasteless lumps of cardboard that I had ever encountered.
I was determined to not let this spoil my day, and also determined to end this association on somewhat of good note. Another motivation, was a photographic offering to a certain Pie aficionado friend of mine. So, I ordered the apple-pie, a la mode, of course! Not bad, not bad at all!

The river behind the Inn has yet to disappoint, I suppose most people do come here to relax in the river, as usually it is a gentle brook and there are Adirondack chairs you can lounge on as the river tickles your feet. It had swelled, recently from the storm, so no lounging on the chairs in the river on this day. Goodbye Big Sur River Inn.

I continued northward towards home, it was not a particularly clear day, slightly hazy. Just clear enough for some zoomed-in shots of the bridges. In case you hadn't heard - I love bridges! :)
Do not remember what this bridge is called. 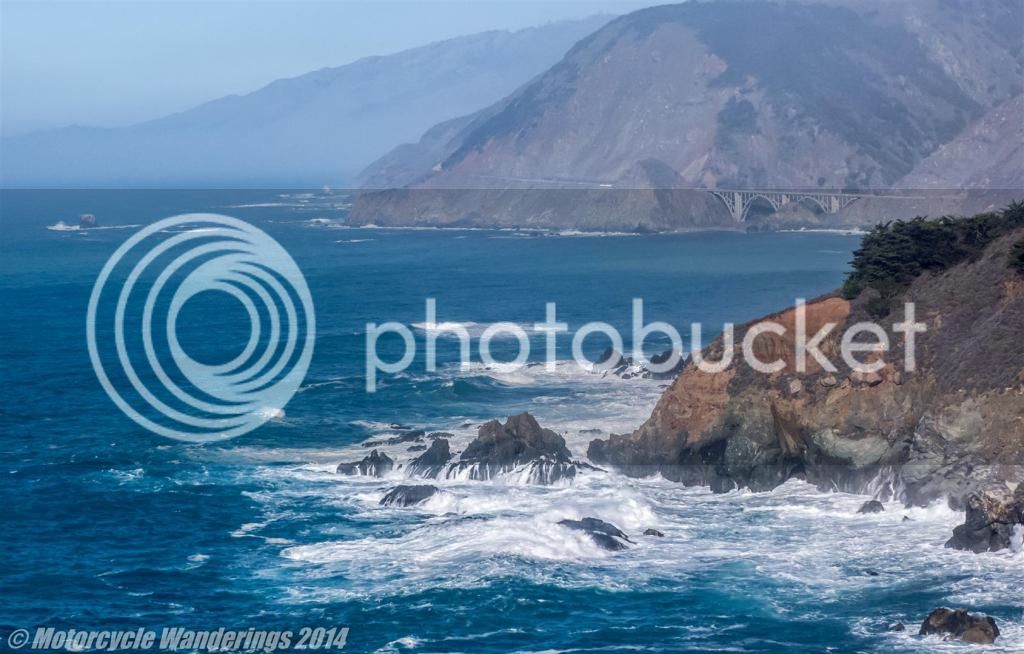