Scouting the Guardians of the Valley - Yosemite.

So, I bought an annual National Parks Pass. Good for entry to all National Parks for an entire year for up to two motorcycles! I want this to be a year of the National Parks - starting with this weekend trip to scout the 'Guardians of the Valley' in Yosemite. I have rode across Hwy 120 (Tioga Pass) a few times before, but I never ventured into the Valley floor. Something about madding crowds always puts me off and keeps me as far away as I can muster, but the desire to see the grandeur up close was too strong and I finally relented.

This April has been warmer than any I remember in the recent past, dryer too - lots of melting snow and clear roads! All signs were pointing to the last weekend in April as the time to strike.

The goal as I hinted earlier, being to scout the various vista points and points of interests and best time of day to view and capture, for repeated forays into the park over the next year, except maybe the summer "it's a zoo" months.

On an early Saturday morning, I met my friend Mike, who had also expressed an interest in a stop to take pictures and let the view sink in kind of a riding weekend. We decided on an IHOP in Folsom (This one) for a quick and simple breakfast before we set off. The day was warm, bright and clear, the scouting incursion was a go ... little did we know as we rode south ... the guardians knew we were coming ... and we had been poisoned ... :(

We stayed off the heavily patrolled Hwy 49 and stuck to back roads, not that it did us much good. We counted 1 CHP, and about 4 Sherriff's vehicles along our route. Only CHP had his radar on. Luckily no one stopped us to sell tickets to the patrolman's ball.

It was already over an hour past noon. Ticket seller presence and lunch in Groveland had slowed us down. When we finally reached the valley floor, we headed straight for Bridal Veil Falls.

An easy, relatively flat hike led us towards the base of the falls. I stopped at a couple of points along the way to photograph the "Pohono" effect. When the wind picks up, it lifts up the falling water at the top of the falls and swirls it around in the air.. 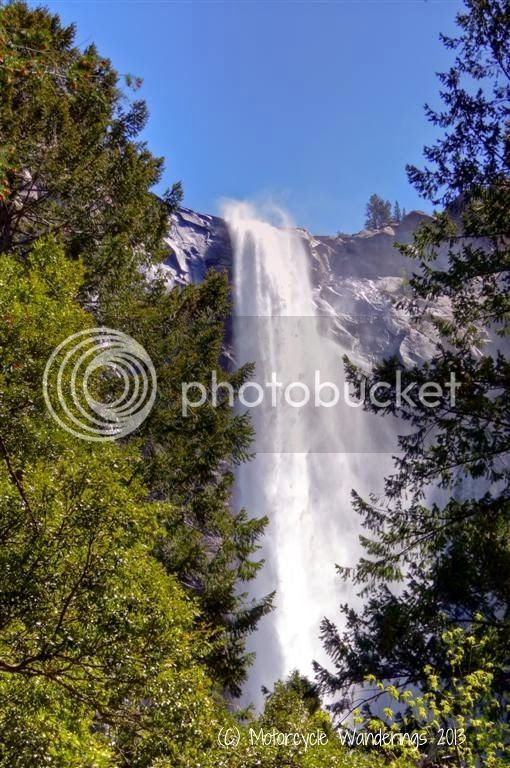 Across from Bridal Veil Falls El Capitan stands watch. Also looking over the Ribbon Falls to it's right. 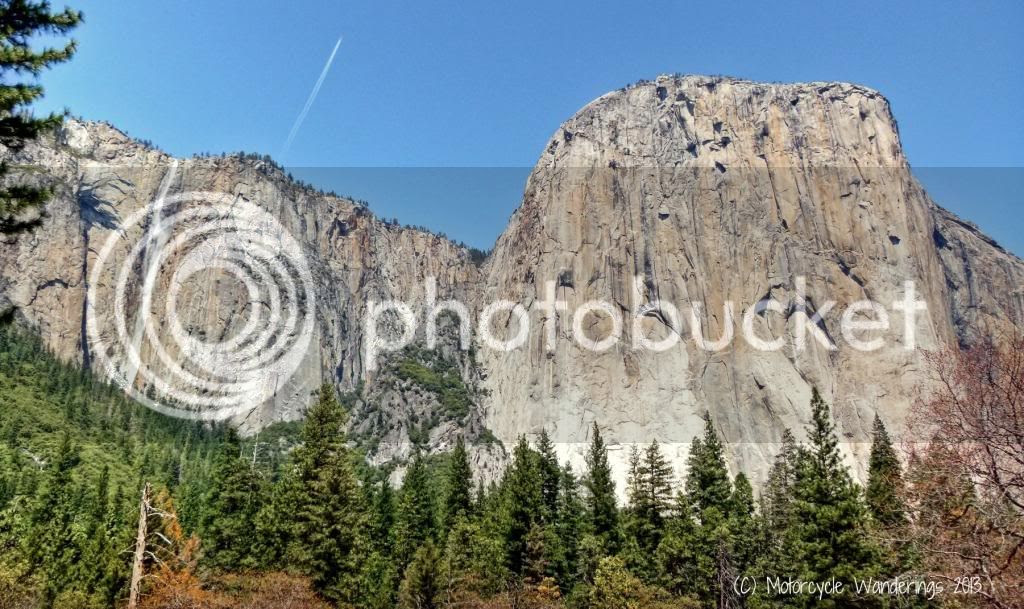 Next, we set our sights on Sentinel Rock - as it stood guarding yet another waterfall (Sentinel Falls) - these numerous water falls are the real treasures of Yosemite. 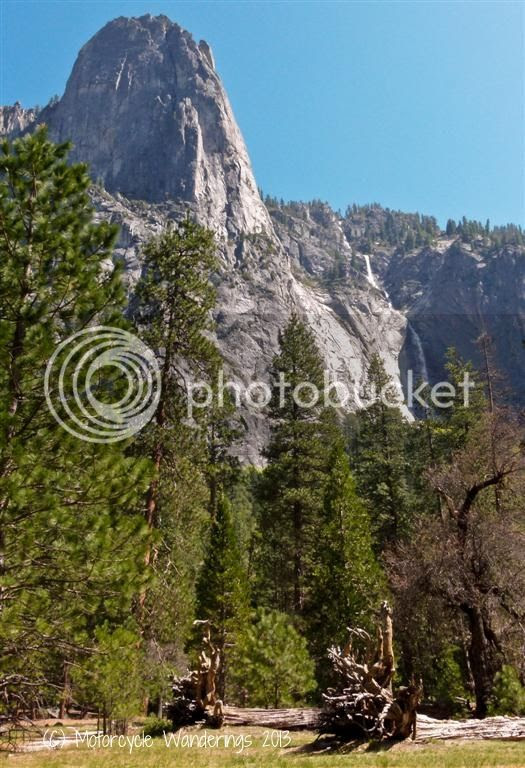 We happened upon this young couple sharing a romantic picnic in the meadow across from Sentinel Rock, with a great view of Yosemite Falls. Can you spot the madding crowds distracting them from each other? Neither could I! :-) 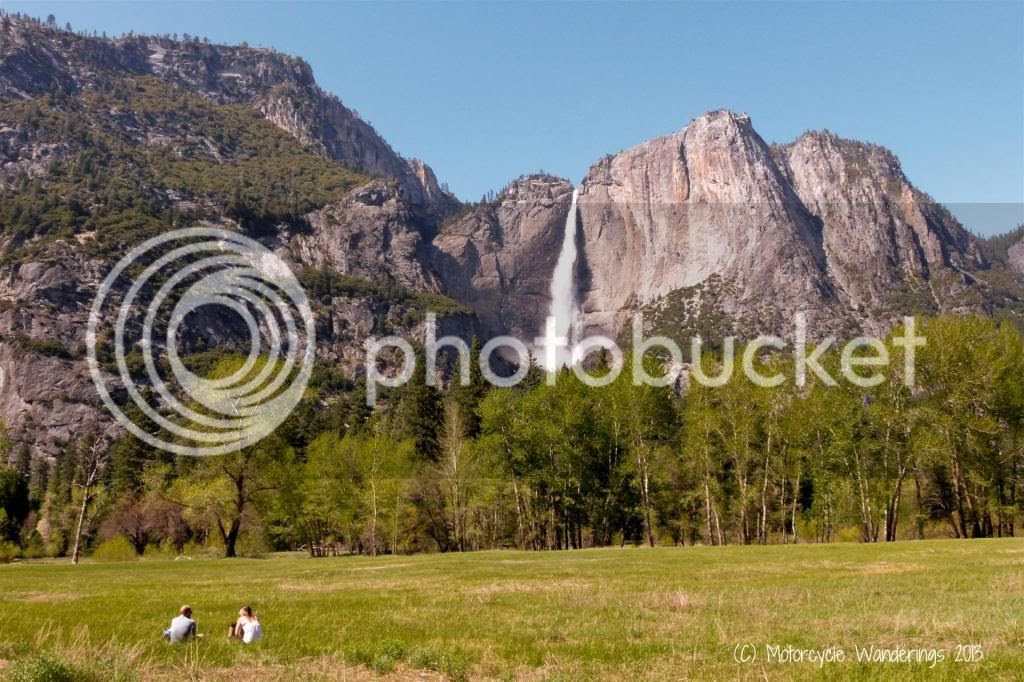 Our sights set high we aimed straight for the Captain, hiding behind some fallen trees to conceal our approach. 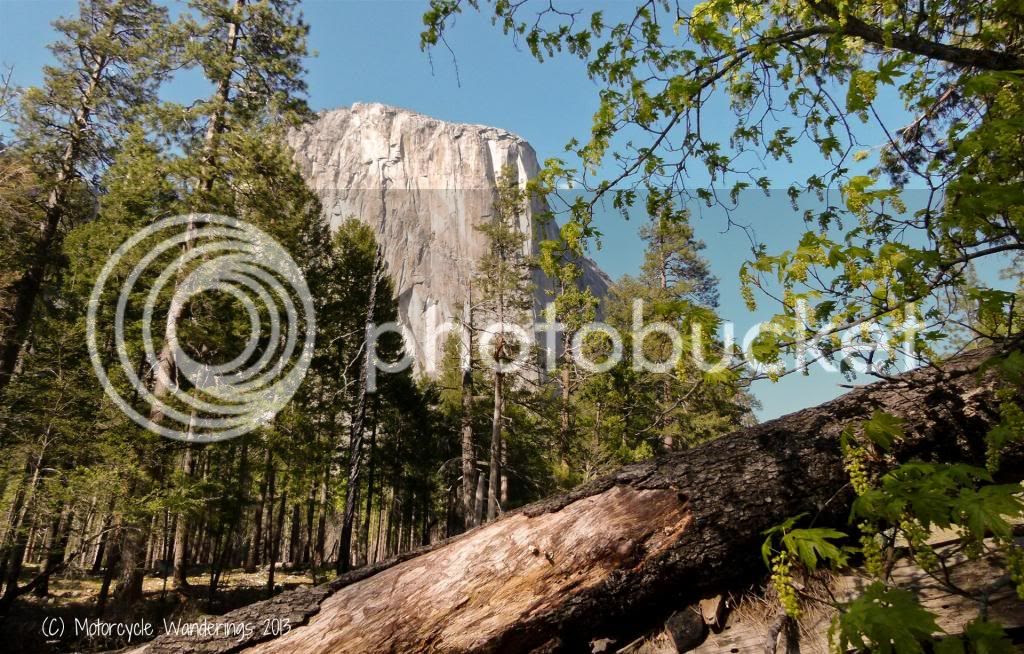 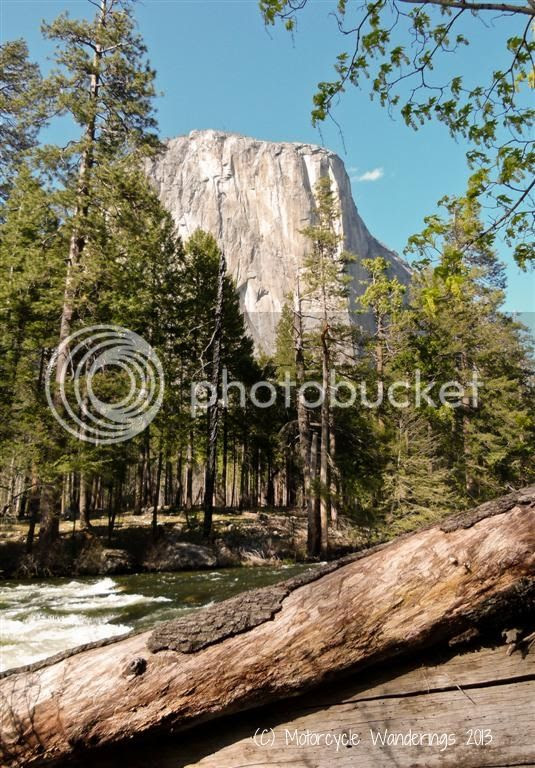 Then when his gaze was elsewhere, we quickly breached cover to cross the river. 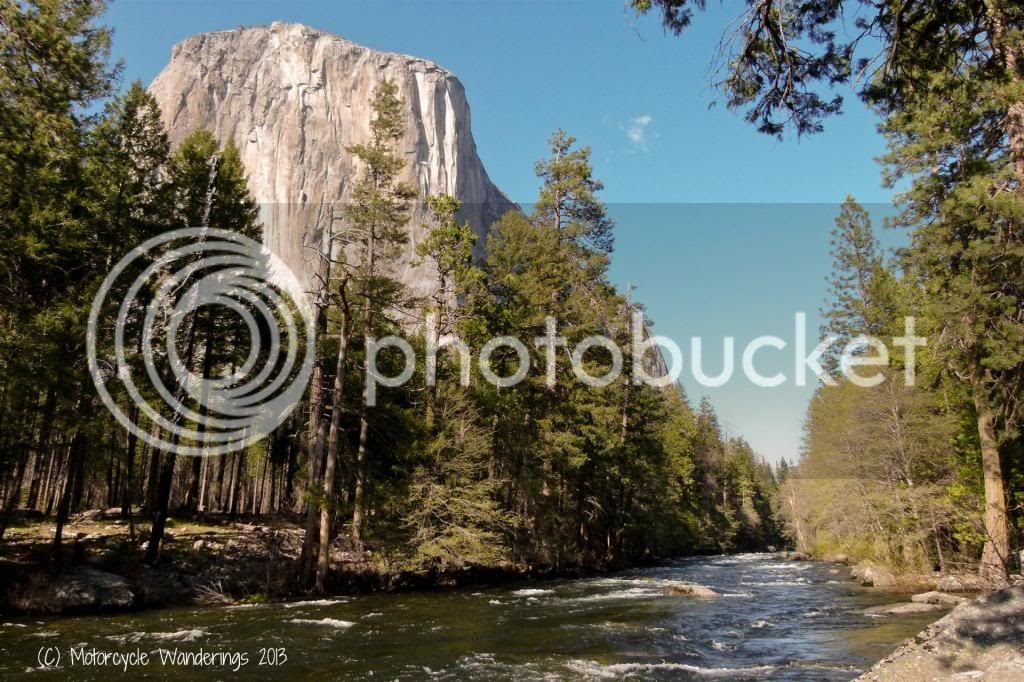 Till we were finally on "The Road to El Capitan"! 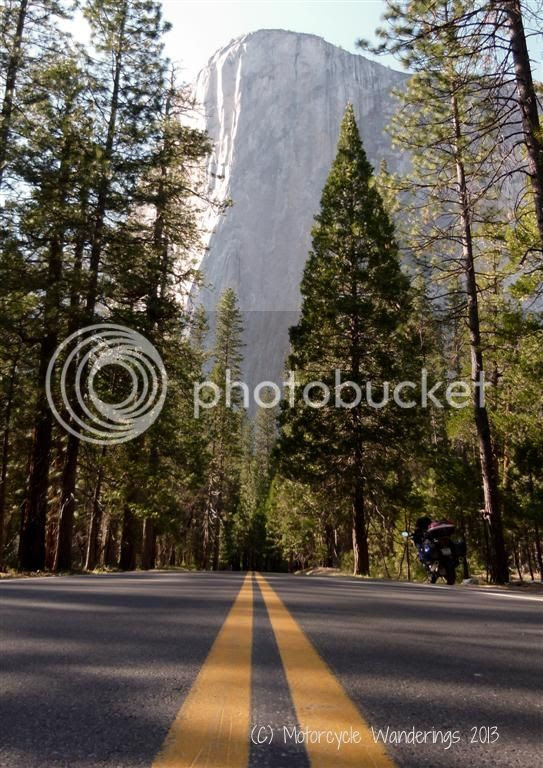 Unfortunately, this was about the time when our forward progress was stopped in it's tracks. The Guardian's agents had successfully poisoned us at breakfast. We had to beat a hasty retreat! It was an early end to the day, but I had come prepared to fight back ... to quote the Governator ... "I'll be back!" and to quote Austin Powers ... "Who does #2 work for? ... "
... and back we were the next day. Early in the morning, and headed straight to Tunnel View - maybe a bit ill advised, morning is not the time to capture Tunnel View. It is best conquered late afternoon or before sunset, but there was a silver lining that we were once again far from the madding crowd.
It still was a view to behold, despite the morning haze and the sun in our eyes (and lenses).
Yes, we rode, we saw, we didn't quite conquer.. :-) This spot would be magical at sunset. Throw in a few light clouds to diffuse the fading amber light and it would be bliss! Although, it would be a mad struggle elbowing for tripod room. In addition, unless staying in the valley, waiting for sunset on a motorcycle is probably not something I would want to do.. 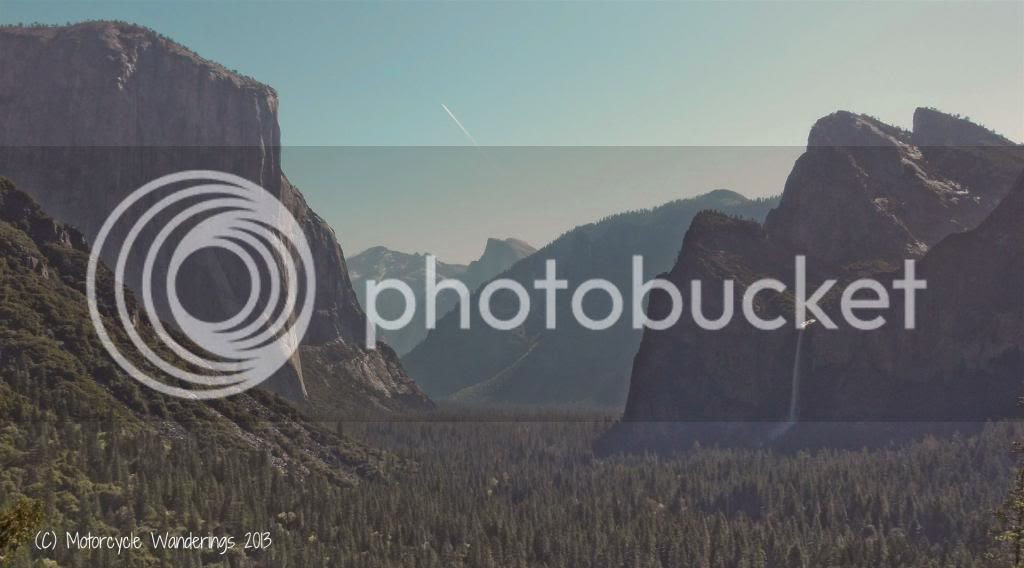 El Capitan covering for and protecting the wounded warrior (Half Dome). 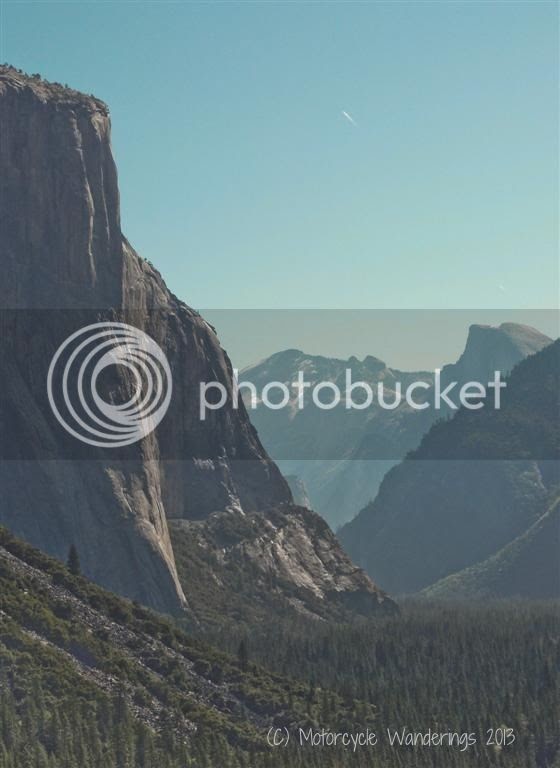 Descending into the valley again. We found El Capitan to be in a reflective mood. 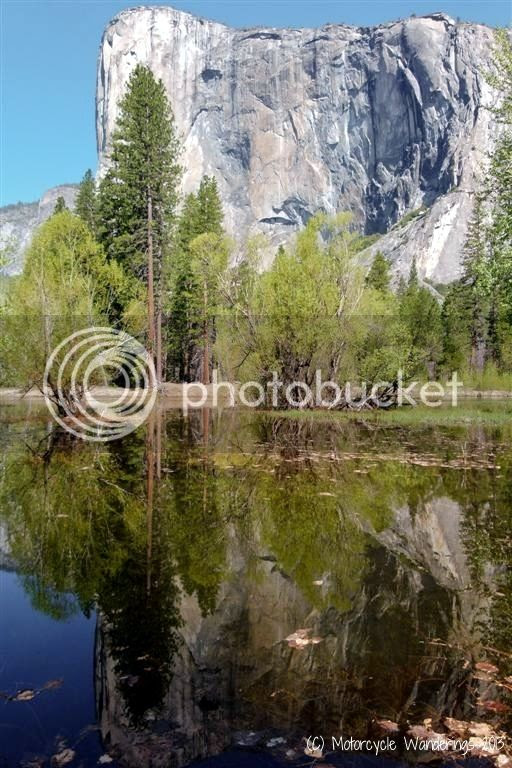 A mood shared by the Three Brothers. 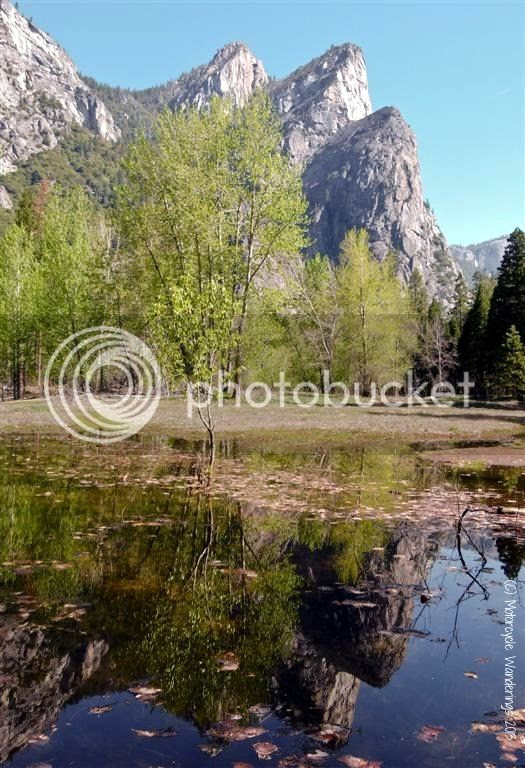 Which left the path clear to approach Yosemite Falls! 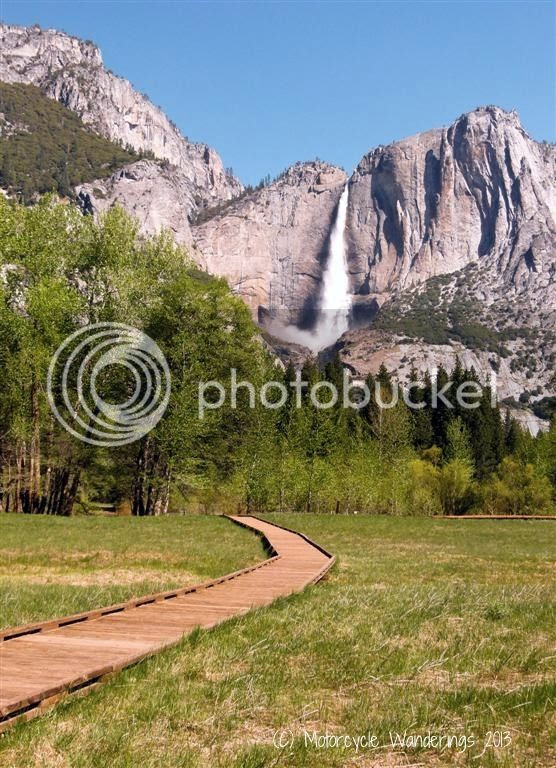 Maybe they were in a pensive mood because yet another beautiful woman was getting hitched. This one hailed from Portugal. The ever dwindling supply of beautiful and available women would put anyone in a sobering mood. 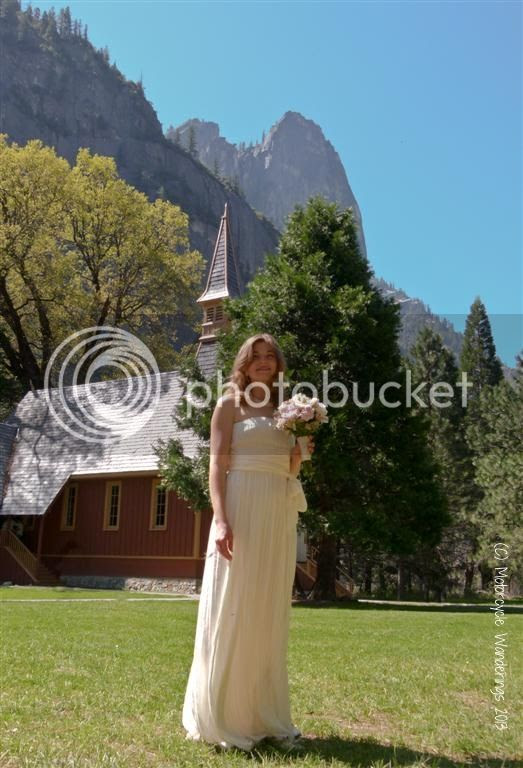 The old, wizened one with only Half a Dome wasn't being so contemplative ... yet, his gaze was affixed on the river ... 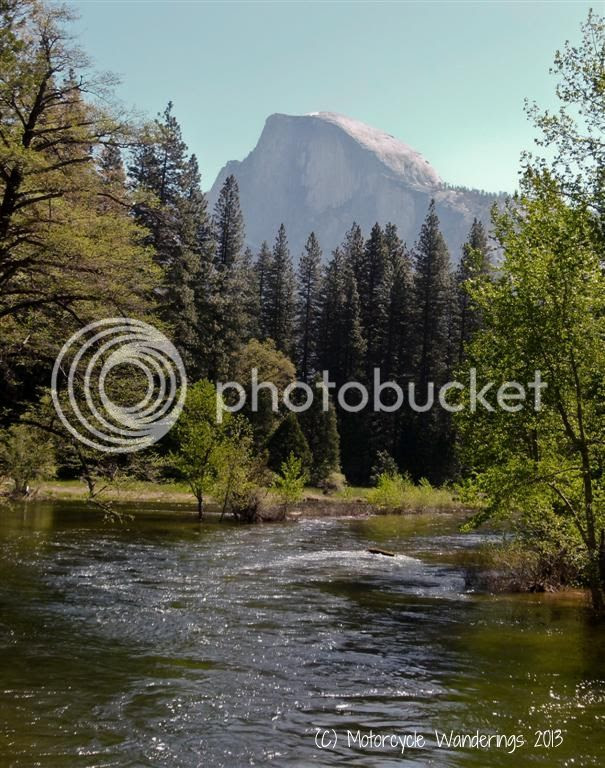 ... allowing us to keep getting closer to the twin falls of Yosemite. At 2,425 feet combined, they are the tallest falls in Yosemite. 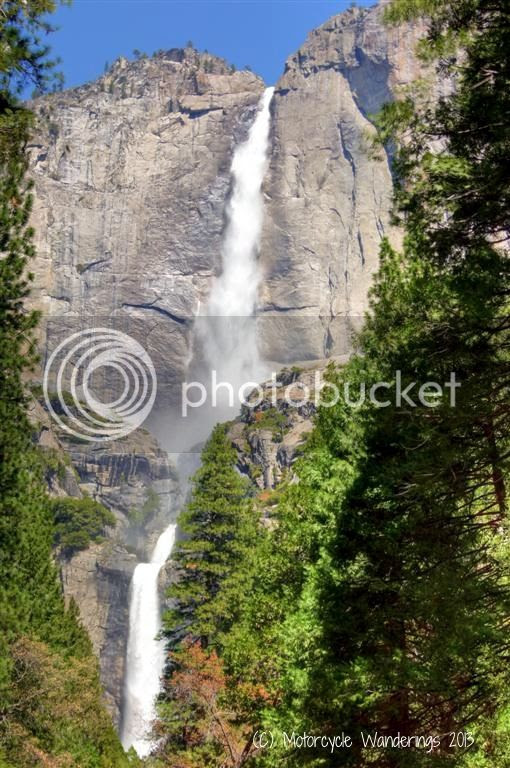 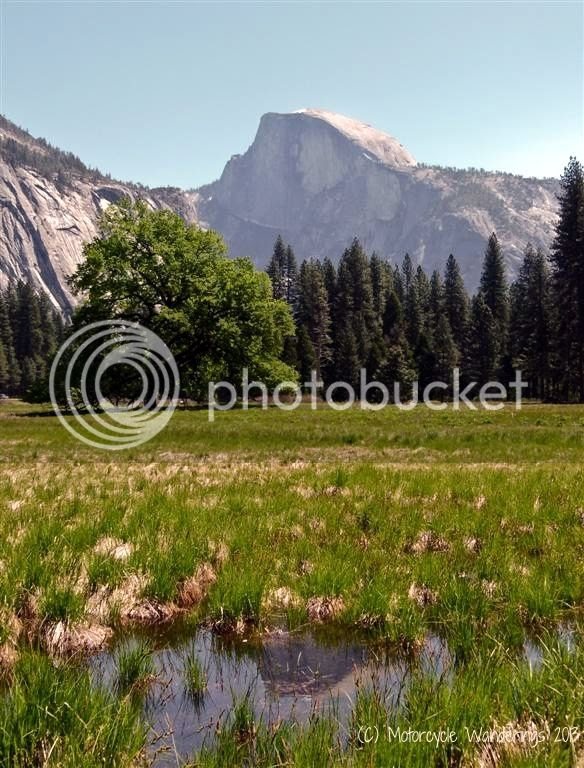 The lower Yosemite Falls and the strategic bridge near it. 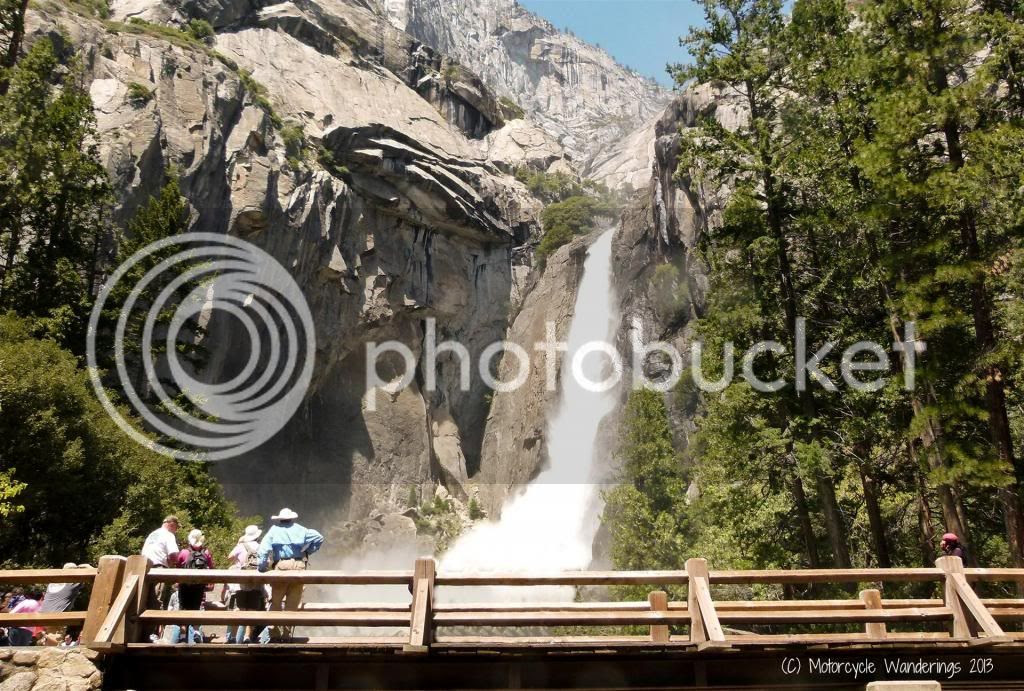 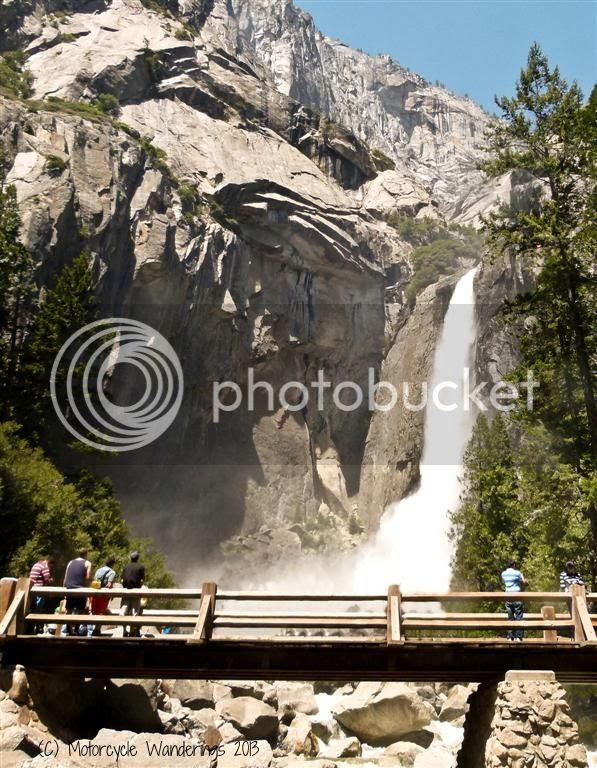 Half Dome was still busy mirroring his thoughts ... 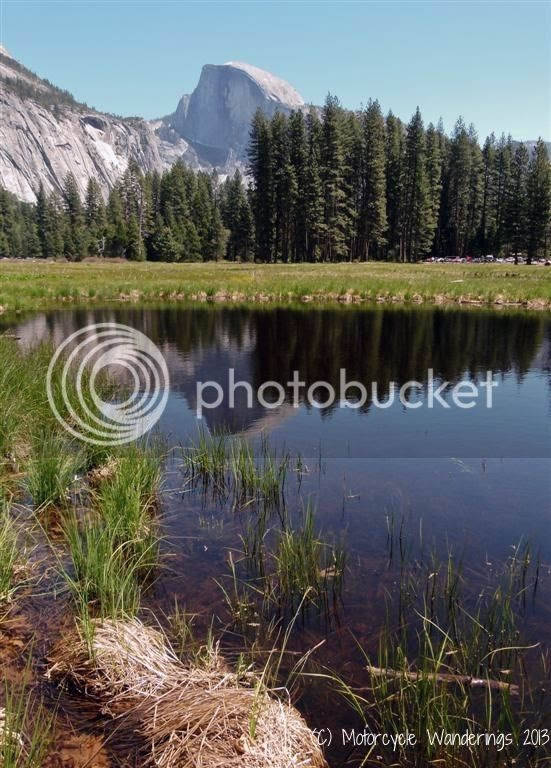 The North Dome on the left, however, was ever the watchful. 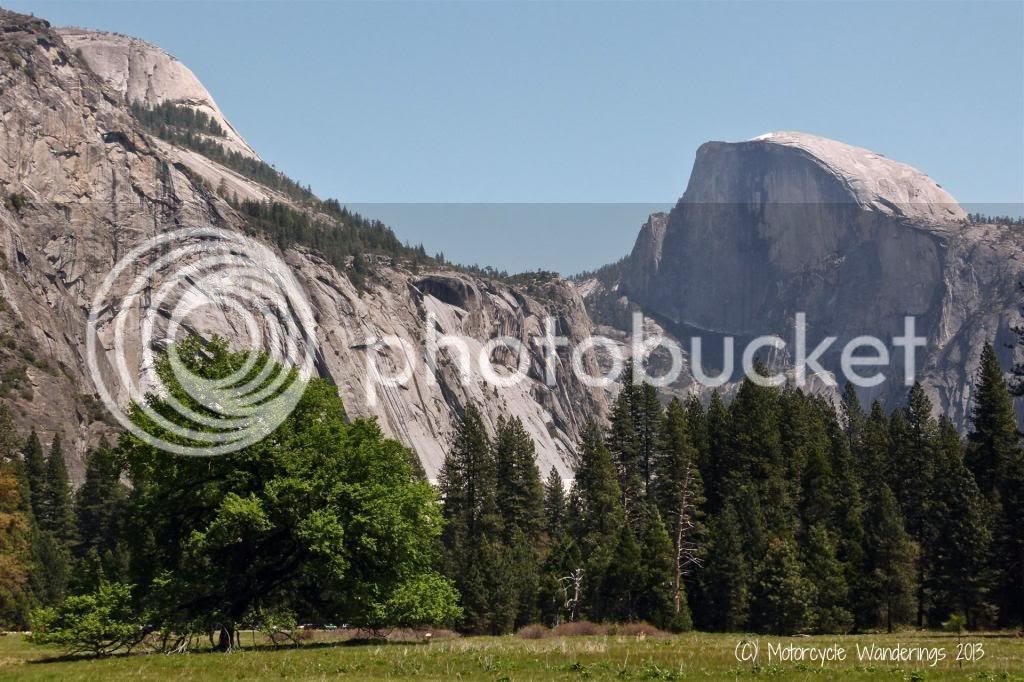 No, North Dome wasn't reflecting at all! 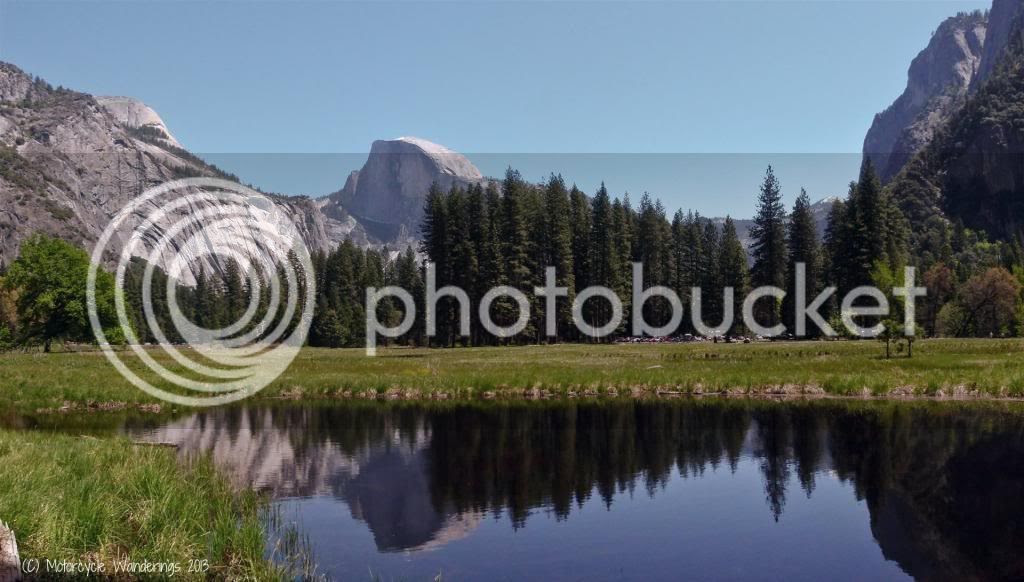 Busted! We made haste towards the exit, looking back for one last "Valley View" at El Capitan, The Cathedral Rocks and Bridal Veil Falls. I had actually wanted to spend a little more time here to experiment with different compositions, but as it happened a tour bus had descended upon the scene, and we were already past delayed for a lunch meet with our friends John and Kathy, so we high tailed it out of there. 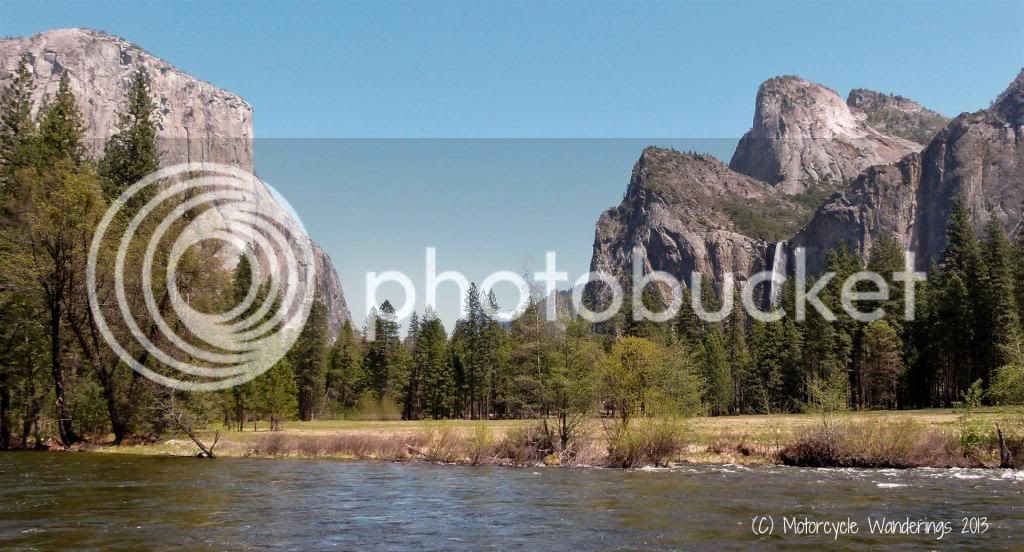 We were smug in our belief that we had made good our escape from the Valley, but the Guardians had sent a mindless beast to intercept us. Just before we escaped through the gates, this mindless creature ambushed us. In a crazed Kamikaze attack, it jumped from a cliff, landing several feet in front of me. It had jumped from a height too high and it lost it's balance and collapsed on the road, kicking it's legs erratically, desperately trying to regain it's balance. It threw me into frenzied emergency braking, trying to halt my charging steed before I came upon the beast. Then miraculously, just as I had determined it was unavoidable and was getting ready to let off the brakes and get on the throttle in an attempt to push it out of my path - the beast regained it's footing and darted across the road a mere 10 feet or so in front of me.

We had made our escape, but only by the skin of our teeth!

Thank you very much for reading, and for indulging (or tolerating) my juvenile 'Scouting the Guardians' fantasy. :-)
Posted by Puppychow at 1:06 AM