Touring the Golden State in their Golden Years - Redwoods and the Coast. (Not a Ride Report)

It has not been a fun task, writing the final chapter of the 'Golden Tour'. Granted the entire purpose of this blog is to serve as a memoir of sorts, call it a repository of photographic memories, enabling me to return, days, months, even years later and reminisce with a clarity which remains as precise as when the memories were made. Despite all that, I do miss my family and wish the tour could have just continued on. Writing about this last leg of our trip together, thus, puts me in a somewhat pensive mood.

We had a bit of a slog from Mt. Shasta to get to the Avenue of Giants. Hwy 299, which keeps getting busier and busier, can still be a fun ride on the motorcycle, much less so when driving a rental car. Suffice to say, my parents were happy to stretch their legs and just stretch out and rest for a bit under these massive trees. The Giant Redwoods don't quite sport the girth of their cousins - the Giant Sequoias, but grow much taller, up to 375 feet or more. 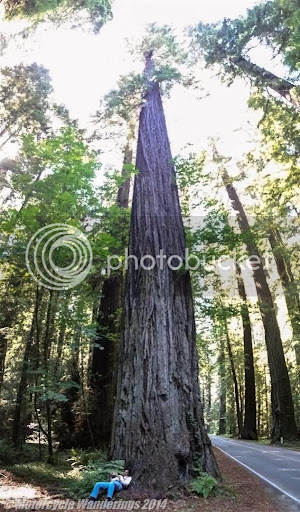 Touring the Golden State in their Golden Years - Lassen, Shasta and Crater Lake. (Not a Ride Report)

It has been a while since I have updated the blog, the back log is now a few months long. I have been in a time crunch all year, which has shown no signs of relenting. Nevertheless, I wanted to try at the very least to continue and finish the story of my parents' grand tour of California during their visit here this summer. Once again, as is evident from the post title, this is not motorcycling content. It appears it will be 2015 before any motorcycle content appears again on this blog, it has been that kind of a year. The readers of this blog primarily being of the motorcycling community, I am not sure if they are following along, and if they are, then I thank them for their understanding and patience. I must finish what I started, but it is not just that, needless to say I am taking great pleasure reminiscing on this blog, about the time I spent with my family this summer. So be forewarned, pictures of my family have replaced the usual pictures of my motorcycle juxtaposed against grand vistas. :)

After our return from Yosemite, our sights had shifted north for another great outdoors expedition to the volcanoes of northern California and southern Oregon. Our first stop was Lassen National Park. This park has the southernmost active volcanoes in the Cascade Range, part of the 'Pacific Ring of Fire'. This is an active geological area with boiling mud pots, smoking fumaroles and churning hot springs. In the picture below, you can see a smoking fumarole in the background.

Touring The Golden State in their Golden Years - Yosemite. (Not a Ride Report).

In case some of you have been wondering, what happened to my wanderings? This Summer I took a long break from 2 wheeled adventures and spent some very enjoyable and quality time with my parents who visited me for a couple of months. It was a conscious decision to forego any solo 2 wheeled adventures during their entire visit. Although I missed riding off into the yonder, I wouldn't have had it any other way than spending time with them while they were here.

This didn't mean that we stayed at home all the time, I took this opportunity to show them around our diversely beautiful California. My parents have been to California before, that trip, we mostly explored the great cities of California - San Francisco, Los Angeles, San Diego, and even an excursion into Nevada for a trip to Las Vegas with a side trip into Arizona to see the breathtaking Grand Canyon. This time, however, we mainly stayed away from the concrete man-made jungles, with all the overcrowding and awful traffic and focused instead on what I call God's country here in the scenic wilds of California.

Our first excursion, in our journeys, was to a place that I consider to be one of the natural wonders of the world - Yosemite!

Our first photo stop being "Tunnel View" vista point, you emerge from the tunnel on Wawona Road and it just takes your breath away!

Not too late to enjoy Spring in Northern California.

A sprinkling of April showers have so far kept us cooler here in the Northern California valleys, while the showers haven't alleviated the drought situation that we face now and which will only worsen in the Summer, they have so far managed to bless us with mild temperatures in what soon promises to be one hell fire of a late Spring and Summer. Those of my friends who live closer to the coast may not appreciate how nice this time of year feels for us in the valleys inland. Dry heat it maybe when it finally rolls in, but it is an oven nonetheless.

For now, however, it is as pleasant as it can be. So far, I hadn't taken the time or the opportunities to explore the soon to turn golden hills of the Sierras for some Spring color and some Spring blooms. The last couple of weekends, I decided to just that. Take a short break from the preponderance of BMR bonus hunting for a weekend, and get back to a more relaxed state of riding and exploring and take my time whilst taking a lot of pictures, instead of shooting and scooting to the next one, as I have been doing most of this year. I also had a very dear friend visiting from out of town for a long weekend, so that was another excuse to get out and enjoy Spring, whether on the motorcycle or on 4 wheels.

There are some great wineries in Amador county, I very much enjoy coming here for good wine and great scenery, it is much less crowded, and much more laid back and relaxing here, not to mention unpretentious and not stuck up like Napa valley. Very welcoming and inviting too, like how I felt about the walkway in the picture below, that drew me in.

Marching across bridges - with a motorcycle and a cell phone.

Several quotes come to my mind when I think of bridges.

Some which make me ponder and smile..

"We build too many walls, but not enough bridges." - Isaac Newton

"Fear builds walls instead of bridges. I want a life of bridges, not walls!" - Lisa Wingate

I love both of these quotes, it is so much easier to build walls, than bridges, but walls take you nowhere, and neither do they show you what's on the other side. :-)

.. and others which leave me conflicted..

"A bridge has no allegiance to either side." - Les Coleman.

"The fate of bridges is to be lonely; because bridges are to cross not to stay." - Mehmet Murat Ildan.

It leaves me conflicted because here we have philosophers opining that one's fate is to be lonely, unless one picks a side. Knowing both sides is not enough, is this akin to sitting on a fence (wall)? Are bridges then in some sense also like a wall?

"I can almost understand why people leap from bridges." - Charles Bukowski.

I will cross that bridge, when I come to it, I suppose, which I hope is never! :-D

I did, however, cross many other bridges in March, another fun theme in the scavenger hunt called the Big Money Rally. I am as competitive a person as any other, and this rally demands a lot of one's time and attention to stay competitive, especially if you are handicapped by the demands and responsibilities of work, which limits your riding to the weekends only. The landscape of the rally leader's board changes constantly, and a couple missed riding weekends will sink you into oblivion. I haven't been carrying my Panasonic bridge camera with me while I have been rallying, barring a few exceptions. This rally relies mainly and solely on cell phones to take and submit pictures, so most of the images have been cell phone pictures, save a few. I doubt these images will stand up to scrutiny on a larger canvas, but they do muster acceptability (barely), for mere blogging purposes.

February was a Big Money month. Big Money Rally that is, maybe it's called that because it causes you to spend Big Money on tires, maintenance, fuel and lodging as you crisscross the countryside on a scavenger hunt for points, scored by finding and photo-documenting certain bonus locations, which fall into several themes, different each year it has been run. This year's themes include libraries, Whole Foods stores, post offices, certain monuments and a 'Been Everywhere' theme which takes inspiration from and creatively interprets the Johnny Cash song into bonuses scattered across the country. Since the rally is mainly structured as a touring rally and the bonuses more often than not lead you off the beaten path, the Big Money Rally also brings big rewards, in the form of big fun and big smiles and discovering new roads and new places, one may not visit otherwise.

Points fever started the very first day of February. A zigzag trip down central California, visiting the heart of the farm lands of California (which feeds the rest of the state, yet is largely ignored and forgotten in the cesspool of the State Capitol), ending up in Bakersfield by sun down - for the last bonus of the day. Some pictorial highlights from January.

It has been a busy start to the year. Work has picked up steam since returning from the holidays, picked up quite a bit actually, but at least they are letting me have my weekends to myself, and I have been doing my best to spend them well, indulging in my hobbies.

I have taken some day and weekend trips around California and I have been playing a picture tag game called the "Big Money Rally" with a lot of my motorcycle riding friends. No, there is no "big money" involved in this sport, just big miles and big smiles and it was conjured as just another excuse to keep riding this Winter and share your fun with your friends. It seems so far that a lot of my motorcycle riding this Winter and well into Spring, will revolve around this rally. It becomes quite addictive once you get into the friendly competitive spirit, the unquenchable thirst for points keeps driving you to ride more and score more points. I am having fun with it so far.

I wanted to share with you some pictures that I have taken, whilst out and about this month. I will keep it pithy and try to let the pictures along with their captions spell the majority of the prose for me.

Monarch Butterflies in Pacific Grove, CA. This Butterfly town has a tiny park which serves as a sanctuary to these exquisite creatures. 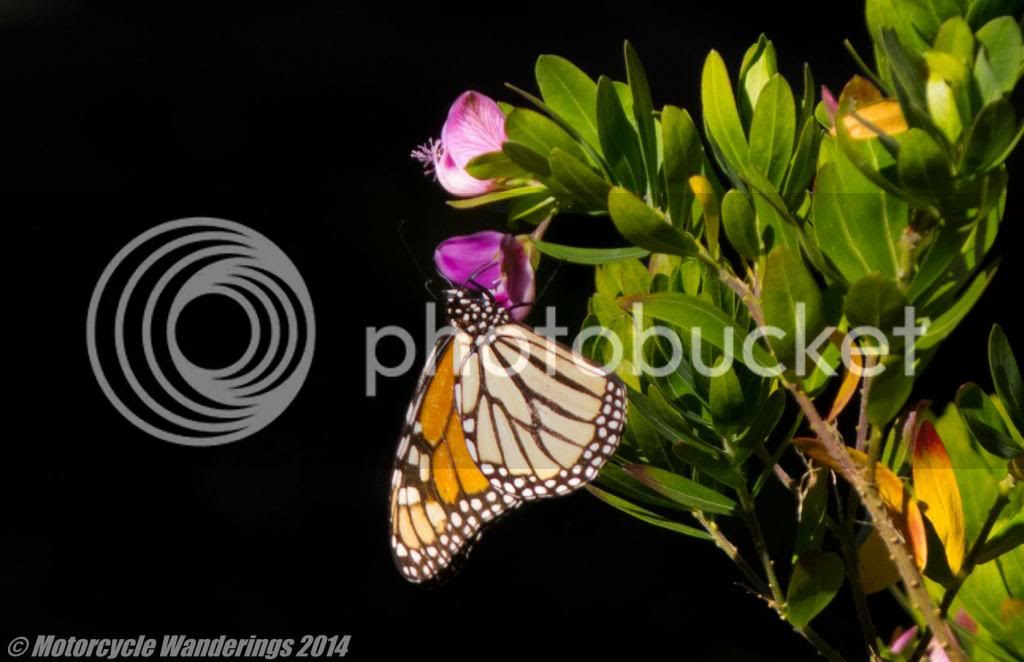